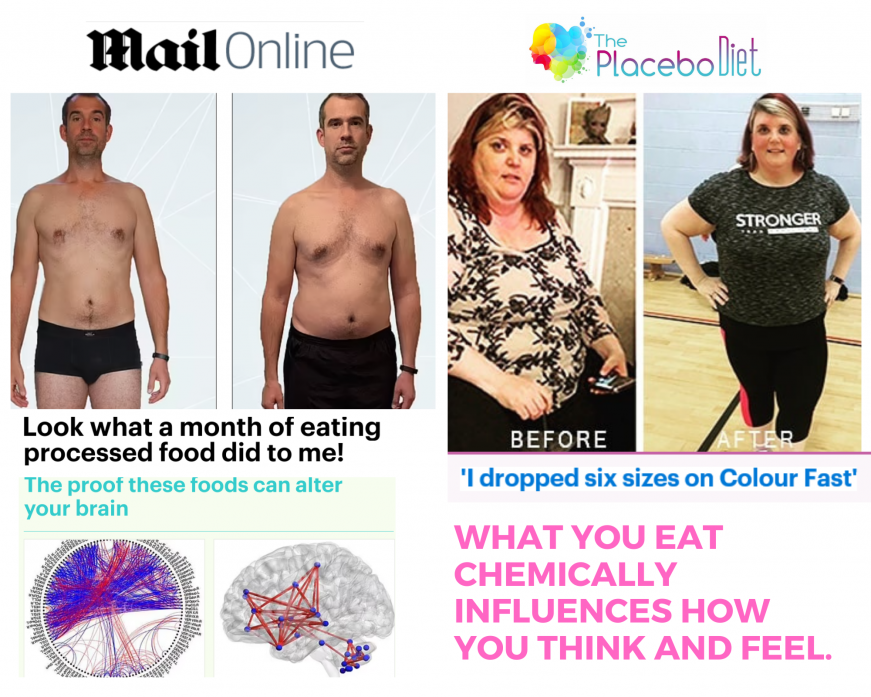 I have always taught in my Placebo Diet that what you eat chemically influences how you think and feel.

May 18th in the Daily Mail Online, Dr Chris van Tulleken documented his one-month experiment of overeating, and the shocking results on both his body and his brain. In four weeks, Dr Tulleken went from being a healthy weight to being overweight, putting his health at risk and not to mention the sluggish thinking, bad sleep, enhanced anxiety, heartburn, constipation…and even piles.

Physically that’s awful enough, but he also discovered that his brain rewired itself just as if he had developed an addiction. Dr Tulleken wasn’t even trying to gain weight, he just ate mindlessly and consumed 80 per cent of calories from highly processed foods (chicken nuggets, cereals, convenience foods, ready meals, pizza etc.) which is pretty much the same diet millions of Britons eat day in and out.

If a food contains an ingredient that you don’t find in nature and that has a chemical sounding name, then it’s likely been industrially modified in a factory, it usually lasts forever in the cupboard and is sold high and cheap at supermarkets. Dr Tulleken experienced that with the freedom to eat anything, came an addiction, it was very difficult to stop eating, getting to the stage where he didn’t want to eat but just couldn’t stop, and just having foods in the house was hard to resist even for the rest of his family who did not want to be part of the experiment.

Processed food is made using the cheapest possible ingredients and designed to be over-consumed and addictive. This isn’t food that loves you back.

At the end of 4 weeks, Dr Tulleken had put on 6.5 kg, 3kg of this being body fat, his BMI went from normal to overweight, and he developed moobs and a bulging stomach. He experienced a 30 per cent increase in hunger hormone Ghrelin that turns the hunger signal on…. and a significant decrease in the hormone Leptin that should signal a ‘full feeling’ and stop further desire to eat. The correct balance of these hormones can be achieved with the right balance of nutrients – eat the wrong things and your hunger signals become corrupted. This hormone imbalance is the root cause of obesity – food cravings can be a huge downfall; they are created by food choices and your brain and ‘willpower’ cannot keep them at bay.

Dr Tulleken’s MRI brain scan showed a significant increase in the connections between the reward centre and areas that drive repetitive automatic behavior, meaning he’d become wired for cravings and mindless consumption, exactly what you would see with an addiction to alcohol, cigarettes or drugs. His brain became ‘hyperconnected’, priming him to seek out the junk food fix. He also recorded a slight reduction in grey matter.

If you are ingesting something that does the same thing as dopamine, serotonin or endorphins (chocolate, caffeine, alcohol, junk food), these unnatural substances take over their role and we crave them even though they are unhealthy and physically not good for us at all.

Dr Chris went cold turkey to change the wiring of his brain from the addictiveness. Six weeks after filming, a third MRI showed the changes in the brain had not reversed. This is a month – imagine what would happen in a year?

Extensive daily remodeling of your body is determined by the quality of cells your body produces, which of course is dependent the food you eat and the water you drink.

I created The Placebo Diet as the first and only weight-loss program that combines a scientifically created simple-to-follow nutrition plan with practical mind exercises which permanently change the patterns and habits that make you overeat. The two elements combined, are the powerhouse to transforming weight and health.

The nutrition system helps identify which body systems may be out of line and helps bring your body back to fat burning efficiency and optimum health, and the mind exercises help create new habits that mean the desire to overeat is lost and you will be naturally driven to make food choices that bring you more energy, more vitality and reduce your waistline.

I have over 25 years’ experience helping people achieve their goals as a nutritionist and weight-loss coach, I’ve seen how so many diets that only work on the food element ultimately fail to achieve a healthy mind and a healthy, fat burning body.

That means you need a system – a way of choosing the right foods that will last you a lifetime. The colour code system is that system. You can use the colour code template to create a lifetime eating plan that will bring you health and energy!

There are three reasons why most diets don’t work.

Most weight loss regimes are based around nutrition and exercise which leaves out arguably the most important element, which is the psychological approach. As you can see from the article even after 6 weeks of eating good food Dr Tulleken’s brain was still wired to crave the processed foods he had been on.

When you combine tools to change neurology, with the right nutrition advice that genuinely promotes health…. health and weight loss are inevitable.

My Placebo Diet not only gives you the right foods to change your body and the way it functions, but also to change how you think and feel and IT WORKS!

I have numerous testimonials here of amazing results people are getting:

I attended Janet’s online Placebo Retreat and would recommend this to anyone. I intended to do the whole course and then make the changes afterwards, but during the coaching calls and using the guided meditations in the resource pack, change just happened. I didn’t initiate it, doing things differently and making different food choices felt completely natural and immediately became part of my everyday habits. Even before we got to the “How to change your habits” lesson – I already had!! The coaching and support I get from Janet benefit me on so many levels and is about much more than just weight loss (which has happened for the first time in years). It makes me enjoy being me & I can’t remember the last time I felt that! Wow! – Louise

Join my Premium Membership & Mentoring for 24/7 recipes, mind changing techniques and exercise videos PLUS personal mentoring from me – for just £20 per month. Everything you need to create your best mind & body.